The Lion, the Witch and the Wardrobe tour kicks off with school discounts and resources available

The Leeds Playhouse production of C.S. Lewis’ classic The Lion, the Witch and the Wardrobe has begun its UK and Ireland tour, with educational resources on offer to support school visits, as well as discounted tickets at all venues. 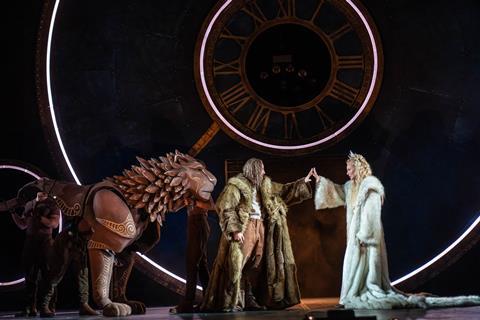 Chris Jared stars as Aslan alongside Samantha Womack as the White Witch.

Schools across the UK can see the iconic story unfold live on stage at a selection of regional venues including Aylesbury, Southampton, Sunderland, Salford, Cardiff, Aberdeen, Nottingham, Edinburgh, Canterbury, Plymouth, Glasgow, Birmingham, Dublin, Woking, Norwich and Wimbledon, before the tour concludes at Bristol Hippodrome on 7th May 2022.

The production has an age recommendation of six or older, making it suitable for both primary and secondary aged children. In addition, the nature of the show means visiting schools can develop key themes and topics back in the classroom with a dedicated pack of educational resources which compliment the trip and aims to explore the production in greater depth.

After the production ran in London in 2019 and February 2020, schools are able to step through the wardrobe and into the ‘enchanted kingdom’ of Narnia once again.

Pupils can join Lucy, Edmund, Susan and Peter as they wave goodbye to wartime Britain and embark on an adventure in a frozen, faraway land where they meet a talking faun, beavers, the king of Narnia, Aslan the lion, and the evil White Witch.

For more information about all venues on the run and tickets visit www.lionwitchonstage.com