Case Study: Taking to the slopes at Champoluc, Italy 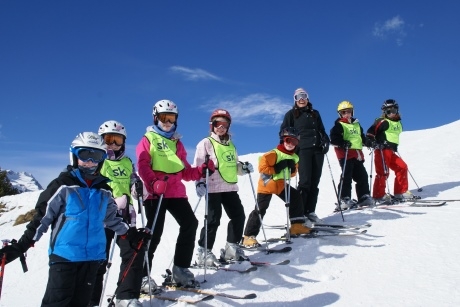 A series of dry runs helped a group of Sussex students prepare to slope off and get the most out of an Italian ski trip.

Assistant principal and PE and Maths teacher Danny Ockmore, who first used Ski 2 in 2013, said: “This was our second trip with them, in which we built on our previous success. I have been leading outdoor residential trips for the past 25 years and during this period I have experienced many different companies within the ski industry. In my opinion, Ski 2 stands out because of their attention to detail and quality of service. At all levels within the company, you feel as if they are genuinely concerned about the children’s experience.”

The college is fortunate in being a short distance away from Knockhatch Adventure Park in Hailsham. The centre has a 360ft dry ski slope, in addition to a nursery run, and welcomes school groups. A plus for teachers is the surface is a continuous carpet of ‘play grass’ and does not have the rigid bristles filled with voids - notorious for broken fingers and abrasive injuries - typical of the surfacing used by other dry slopes.

Claverham advertises the trip 18 months beforehand to enable parents to spread out payments, and many older pupils contribute towards the funding.

“During this time the pupils have the opportunity to learn basic skiing skills through dry slope skiing lessons at Knockhatch,” explained Danny. “We offer four dry slope ski trips per year for pupils on the residential trip and for those who just want the experience. One reinforces the other and builds confidence and motivation.

“This skill development probably puts them two days ahead of other similar-ability children who have not dry-slope skied when they start their lessons in the resort. This means that they can ski more areas of the mountain earlier in the trip and this has a significant impact on their leaning and sense of achievement.”

The college is situated close to the south coast on the outskirts of the town of Battle (the grounds incorporate land which formerly belonged to the Battle Abbey Estate and are immediately adjacent to the site of the Battle of Hastings). History aside, this location enables students to enjoy a longer ski trip than is the norm, and pupils and teachers don’t waste any time before hitting the slopes.

“School ski trips are usually six days, from Friday to Saturday,” said Danny. “But we are lucky that we are only one and a half hours from Dover and can leave Saturday afternoon, arriving in Champoluc early Sunday morning. After breakfast, ski fit and lunch on the mountain, we start with a two to three hour ski lesson on Sunday afternoon. This is followed by five days skiing and, leaving early Friday evening, we return to school early Saturday morning. This is long enough to allow pupils and staff some recovery time before Monday back at school!”

The pupils enjoy an average of five hours of lessons per day, with lunch on the mountain using a voucher system so they don’t have to spend time returning to the resort in the middle of the day.

“The voucher is worth €7 and in many restaurants this goes quite a long way,” said Danny. “We find the Italians warm and friendly, and the cost of food and drink on the mountain is extremely reasonable.

“Three of our staff are alpine ski leaders, which means we can lead the pupils on pistes that they have skied during their lessons. The pupils really enjoy this at the end of the day, feeling that they are doing something a little bit special. We limit this to one run because of the five hours of lessons .You can see the youngsters grow in confidence as the week progresses and develop new friendship groups across the year groups.”

“The pupils loved all of them,” said Danny. “At the outset they were divided into two beginners’ groups, an intermediate and an advanced group. Pupils were then moved between these groups depending on their rate of learning and how comfortable they were feeling. An example of the quality of the company was that in both years we have been with Ski 2 by day three there were one or two children who have been struggling in the beginners’ group. On both trips Ski 2 provided another instructor to work with these pupils at no extra cost, to encourage and focus on specific skills and ensure these children had a good experience.”

“This may seem limited, but the pupils need time to relax and socialise together at the hotel in the evenings following a full day’s skiing,” explained Danny.

Founded by Roger Walker, Ski 2 is a small, independently owned tour operator and specialises in the one resort of Champoluc and operates its own British ski school managed by Ski 2 co-owner Simon Brown, who lives in Italy during the winter. The small team has a combined experience of more than 35 years working in the educational ski course market and selects hotels that are ideally situated for student groups.

This is all part of the appeal for Claverham and Danny added: “Ski 2 only offers three school trips in the resort an any one time.”

Summing up, Danny said: “Many pupils come more than once and, yes, it is an expensive trip, but by spreading out the payments and going by coach it is affordable for many. Over the years many children in Year 10 and 11 have worked and saved for the trip themselves. Many life skills are practised during any educational group visit, and all the more so for this being a sporting trip. As an educational visit, skiing is fun, challenging, healthy and gives the pupils the opportunity to experience another country and its culture high up in the mountains.”

After returning to the school the students organise a rerun of their experiences on the slopes to share with other pupils and teachers.

“Photos and GoPro video clips are displayed on four large TV screens in recognition of the pupils’ achievements and to encourage others to try the sport,” said Danny.

The journey to the resort has also inspired further study and discussion back in class.

“On both trips to Champoluc we have travelled through the Mont Blanc tunnel, arriving to large falls of snow,” said Danny. “For the majority of the children this is a very new experience. To see such extremes  of weather from heavy snow to clear ‘bluebird’ days where you can look at eight peaks rising all around you at over 4,000 metres, including the Matterhorn bordering Switzerland, is an education in itself and provides many opportunities to discuss geographical comparisons.”