Around 70 museums, galleries, archives and heritage sites were taken over by young people for the annual Kids in Museums Takeover Day which saw pupils getting away from their classrooms to talk about climate action. 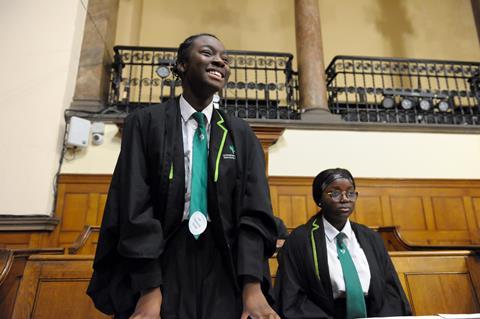 Local students visited the National Justice Museum as part of the annual celebration.

Coinciding with the end of COP26 in Glasgow, Takeover Day on 12th November was themed by Kids in Museums for the first time to encourage museums to address issues that matter to young people and promote climate action.

Takeover Day is when young people take over jobs normally done by adults at museums and heritage sites. Since Takeover Day began in 2010, more than 40,000 youngsters have taken part.

At least half of this year’s participating venues, including the London Transport Museum and PK Porthcurno in Penzance, joined in the theme of climate actions, with activities and sessions ranging from creating posters with signs and slogans and making reusable bags, to debates on whether the Vikings and Victorians were environmentally friendly and the impact of climate change on heritage preservation.

The event saw the return of in-person Takeover Days for the first time since the start of the pandemic, involving around 1,900 young people.

Students helped to develop the new Young People and Protest exhibition at Nottingham’s National Justice Museum. They made their own protest placards, working with an artist, and debated climate change in one of the museum’s courtrooms.

Pupils attended a film screening at the National Museums Scotland in Edinburgh to see three short films they created on how museums can help tell the story of the climate emergency. They then discussed with senior leadership how the museum can better convey and act on the climate emergency.

Others took to social media to share their plans on and around the annual day:

Headstone Manor is being taken over by St John Fisher Year 5 pupils!

As part of @kidsinmuseums #TakeoverDay pupils have been researching our museum and are now ready to takeover as tour guides!

Introducing our #christmas window! This year's window display was created by families from the local community at our @kidsinmuseums #TakeoverDay workshop. (1/2) pic.twitter.com/Ayyc8z7T71

Kids in Museums, which first came up with the Takeover Day initiative, is a charity dedicated to making museums open and welcoming to all children. More information is available at www.kidsinmuseums.org.uk.