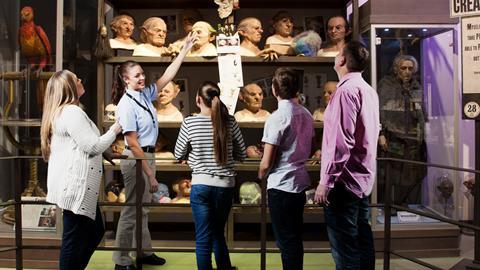 10 school trip ideas: whatever the weather

With such an unpredictable climate in the UK, it can sometimes be tricky to come up with venues that are suitable for all conditions. Here are some ideas for school visits, come rain or come shine.

The Eden Project in Cornwall consists of landscaped gardens and three giant indoor Biomes, so there is plenty of opportunity to spend time outdoors or shelter from bad weather.

The Biomes contain the largest rainforest in captivity and a Mediterranean paradise, so there’s the chance to warm up too, as the Rainforest Biome maintains an average temperature of 28 degrees celsius.

School groups can explore the treetops of the Rainforest Biome from high above the forest; with spectacular views over the canopy on the new Rainforest Aerial Walkway.

Uncover filmmaking secrets come rain or shine at the Warner Bros. Studio Tour London, which takes you on a journey behind the scenes of Harry Potter.

Some of the sets on display include Dumbledore’s office, Hogwarts’ Great Hall and Gryffindor common room.

You can also check out the costumes, animatronics, special effects and props that have been used in all eight of the films – and see exterior sets such as 4 Privet Drive under the shelter of a covered walkway.

A museum visit is a good option for when the weather turns bad. Housed in a Grade I listed former warehouse overlooking the quayside, the Museum of London Docklands reveals stories of trade, migration and commerce through a wealth of objects.

Complement your school visit with one of the museum’s guided tours or talks including the museum highlights tour.

A host of indoor activities will keep your class busy if rain strikes at Legoland in Windsor.

With three historic ships, maritime galleries, a changing programme of temporary exhibitions, and guided tours and events, the Historic Dockyard Chatham in Kent promises an appealing visit whatever the weather.

Schools can learn the ropes at the Victorian Ropery; discover the dockyard story in Steam Steel & Submarines; marvel at really big things in 3 Slip, and learn about the heroes of the RNLI.

The Hearts of Oak gallery uses digital theatre to retell the story of the construction of wooden-hulled, sail-powered warships at Chatham at a time when Chatham Dockyard was one of the world’s greatest dockyards of the age of sail.

Take a wander in the sun around Butterfly World in St Albans, Hertfordshire’s 18 designer gardens, complete with displays of flowers and plants, specifically chosen to attract native butterflies.

For wet weather, schools can step into the Tropical Butterfly House; visit the Insect Study Centre where children can take part in insect handling sessions; Antworld: and the Bee Hut, where a school trip can learn all about the honey bee, and watch live bee activity via a webcam.

Cadbury World in Bournville, Birmingham offers a shelter from the rain for chocoholics, and the opportunity to warm up with some sweet treats.

There are 14 different zones for school groups to walk around at the attraction.

Uncover the origins of the cocoa bean amidst trees and waterfalls in the Aztec Jungle before walking through a full scale replica of Bull Street where John Cadbury opened his first shop in 1824. Finish with meeting the infamous Cadbury drumming gorilla and a chocolate treat with a difference.

Outside in the 120 acres of ‘Capability’ Brown landscaped parkland at Compton Verney in Warwickshire, pupils can enjoy the woodland footpaths which follow Brown’s original plans.

Whilst enjoying the views you can encounter a series of art works woven into the landscape, a human sized bird’s nest, and the restored Ice House.

If the weather is being unkind you can spend your time inside exploring the permanent art collections from around the world.

Set in 90 acres of parkland on the outskirts of Newport in south Wales, 17th century Tredegar House, together with its orangery and stable blocks has an intriguing history. For 500 years it was the home to the colourful Morgan family, one of the biggest landowners in Wales.

Now under the guardianship of the National Trust, schools can take a tour of the house to learn more about its history, or take a stroll through the grounds if the weather is fine.

If the weather is fine, schools spending the day at Yorkshire Sculpture Park near Wakefield can take the opportunity to explore some of the 18th century-designed parkland on foot by booking a tour.

Choose the Historic Lakes and Woodland Tour to discover the rich heritage of the landscape or the Art and Landscape Tour to find out about key works on display.

For less clement days, the park boasts an ever-changing exhibition programme in its indoor galleries.