Stepping into the past on a Ypres Battlefield Trip

A small group of Key Stage 3 pupils from Ipswich High School travelled to Belgium to see the legacy left behind from the Great War on a battlefield trip. 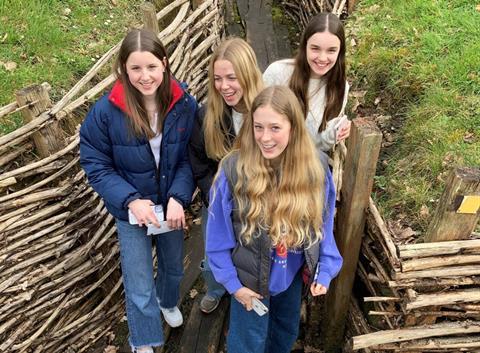 Students visited an old trench to understand the conditions soldiers would have lived in.

Ipswich High School is an independent day and boarding school for boys and girls aged 3-18, set in an idyllic 87-acre campus in Woolverstone on the banks of the River Orwell. After a couple of years, the school was able to resume its residential trip to the World War One battlefields following the disruption of the pandemic. For the first time, the trip was extended to three days and two nights for a group of more than 30 students who were studying the Great War as part of their Key Stage 3 History curriculum.

The school’s location in south Suffolk allowed for a relatively short drive to Folkestone and, after a very smooth Eurotunnel journey, they were soon able to begin their tour of the battlefields. Shortly after lunch, the students were immediately into the trip’s activities, visiting Lijssenthoek Military Cemetery and Bayernwald German Trenches. The group were also able to add an additional stop in the centre of Ypres where students could have a walk about the town square and could also visit the Menin Gate. 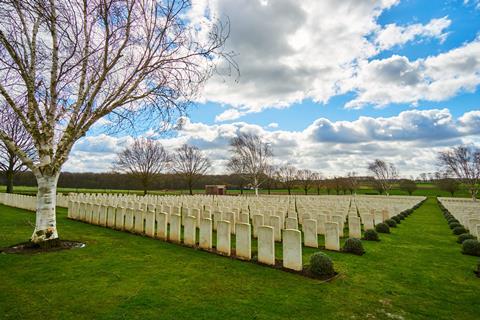 All of the group visited a number of mass grave sites as part of the experience.

Day two was the main day of visits around Ypres, making stops at the In Flanders Fields and Hooge Crater Museums, visiting the trenches at Sanctuary Wood and stops at the Tyne Cot and Langemark (German) cemeteries. The students had so much opportunity to contextualise their classroom learning, beginning to really appreciate the enormity and scale of the conflict during World War One. At the end of a long day, they were able to head back down to the Menin Gate and participate in the Last Post Ceremony, which for many of the students was the highlight.

The school began to head back home on day three but not without some fantastic stops on the way. With Galloway, the tour operator trip was booked with, the school was able to detour via the Somme and visit Newfoundland Park, Thiepval Memorial and the huge Lochnagar Crater. Students and staff could then tuck into the packed lunches that had been provided by the hostel (De lep) in which the school stayed. Teachers said De Iep was a perfect choice of accommodation for the trip, describing it as, “simple and comfortable with a fantastic team who look after the staff and students wonderfully.” 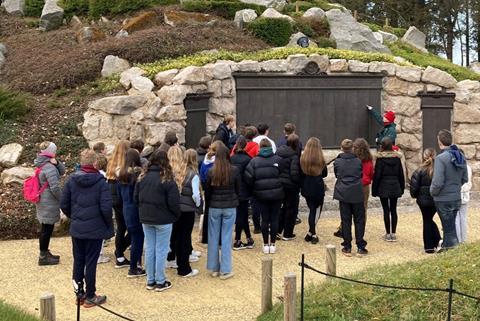 Pupils were shocked by how many names were engraved on each memorial.

According to the school’s staff, the trip is always poignant, but it felt even more special as they were the first group back for two years because of the pandemic. They were welcomed by staff and locals warmly through their days and were made to feel valued as a school group visiting this hugely significant area.

One teacher said: “This is a trip that works so well for the staff and students. Working in tandem with Galloway, we are able to tailor a trip which is interesting, engaging and exciting for the students.” While one of the pupils added: “It was brilliant being able to get away after all of the Covid rules. I loved being able to spend time with my friends, experiencing so many new things.

“It was really interesting seeing the World War One battlefields, the trench systems and the cemeteries. We couldn’t believe how many names there were on memorials and gravestones. It’s so sad.”

Students at Ipswich High School find World War One really interesting to learn about, but always struggle to understand the scale of the battles and the whole conflict. The numbers are so big and abstract that it never sunk in until they were able to see Tyne Cot, the Menin Gate and the Thiepval Memorial, as well as the many small cemeteries dotted around the French and Belgian countryside. By being able to visualise what text books can only describe meant they’re now better equipped for their studies. The timing also coincided with the conflict in Ukraine which, according to teachers, reinforced the horror of war and how we should do everything possible to stop it.