School groups are invited to explore one of the world’s most astonishing historical discoveries in China’s First Emperor and the Terracotta Warriors at Liverpool’s World Museum. 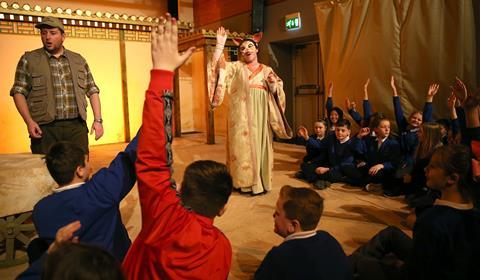 Children will come face to face with formidable warriors discovered in China’s First Emperor, Qin Shi Huang’s burial site, a once in a lifetime opportunity.

Senior Education Manager, Jon Marrow said it offered a “really remarkable opportunity for children who in years to come will remember this school trip”.

He added: “Our workshops and trails have been carefully designed to bring the warriors to life and give children a meaningful experience and an understanding and appreciation for the exceptional treasures of the exhibition.”

Creative director with Hope Street Ltd, Montserrat Gili said: “As a theatre director I have always been interested in what role the audience play, and in Rise of the Terracotta Warriors, the children are immersed in the adventure from the beginning by becoming characters in it. Thanks to a fantastic team of creatives, including original music and animation, and the participation of Pagoda Arts, we hope every child will have a memorable time.”

School groups will also have exclusive access to the exhibition at a reduced rate before opening hours on selected dates between 21st February and 2nd May.

China’s First Emperor and the Terracotta Warriors features more than 180 spectacular artefacts from museums across Shaanxi Province, more than half of which have never been on show in the UK before.

Showcasing objects from one of the world’s greatest archaeological discoveries, the exhibition spans almost 1,000 years of Chinese history; from the conflicts and chaos of the Warring States period, to the achievements and legacy of the Qin and Han dynasties.

World Museum’s Terracotta Warriors exhibition will be a major part of Liverpool’s 2018 celebrations, marking a decade since the city held the title of European Capital of Culture 2008.

Teachers wanting more information or to book, should visit the education section of the museums site.