A new Maths Festival, planetarium workshops and a space spectacular week are some of the new highlights announced for the 2016/17 education programme at the Royal Observatory Greenwich. 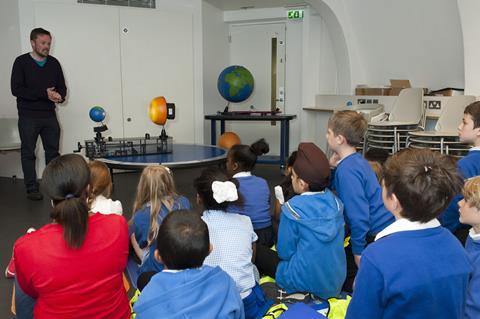 The London-based observatory will be putting on its first ever Maths Festival on selected Fridays throughout February and March 2017.

Maths Festival Days will be aimed at Key Stage 3 students and consist of a planetarium show titled Maths and Beyond and a workshop called Maths and the Milky Way.

Students visiting on one of these Fridays will also get to visit the galleries at the Royal Observatory Greenwich that showcase everything from the formation of the solar system and the Big Bang to what being an astronomer involves.

Also new in 2017 will be a planetarium show and workshop combination, available to enjoy during Space Spectacular week in March 2017.

The planetarium show is called The Final Frontier and will be followed by a new interactive quiz workshop called A Question of Space. This will be suitable for Key Stage 3 students.

Another new workshop for Key Stage 3 and 4 students is Action Reaction: Forces in Space; it last 45 minutes and covers Newton’s laws of motion, different types of force, and magnetism.

Meanwhile, workshops that are available now and will continue into the programme next year include The Solar System and Beyond, and Maths and the Milky Way – both suitable for Key Stages 3 and 4.

The Solar System and Beyond session covers Kepler’s laws of planetary motion, orbits, and Newton’s laws of gravity. The class get to use astronomical software and real data in this interactive ICT-based session to learn about the solar system.

Meanwhile, during Maths and the Milky Way, students will cover Mathematical techniques including calculations, unit conversions and the construction and interpretation of graphs and charts.

As part of its 2016/17 educational programme, the Royal Observatory Greenwich will also release a series of new content for teachers on a regular basis, including videos, podcasts, blog posts and classroom resources.