Clifford’s Tower in York has opened its doors to schools, following a £5 million project to conserve and transform the interior of the 800-year-old landmark. 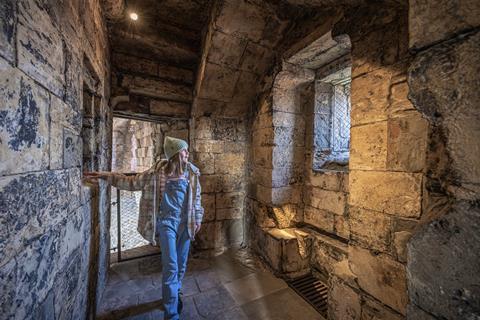 Where previously the tower was an empty shell, English Heritage has now installed a free-standing timber structure within it, protecting the ruin and creating a new roof deck to provide views over the city of York.

On the tower’s lost first floor, aerial walkways now open up hidden rooms for the first time since Clifford’s Tower was gutted by fire in 1684.

Free school trips can be organised to the tower and English Heritage, which looks after more than 400 historical sites across the country, has also updated its teachers kit and has a GCSE site proposal tailored to the site.

How Clifford’s Tower links to the curriculum

Kate Mavor, chief executive of English Heritage, said: “At Clifford’s Tower, new architecture is transforming a centuries-old landmark, opening it up and unlocking its secrets. We’re protecting Clifford’s Tower for future generations and inspiring more people to discover its stories.”

Staircases and walkways combine to take pupils ten metres up to a new roof deck from where they can see the York skyline.

En-route to the top, school groups can see the tower’s architectural details, a royal chapel and, for the first time since the 17th century, a toilet built especially for Henry III.

New interpretation helps place the tower in the context of both the historic York Castle and the city of York itself, as well as introducing students to the tower’s long and turbulent history.

Pupils can engage with five key moments in its history with the help of the voices of local residents who bring the stories of fictional characters to life, each representing a different chapter in the tower’s past. 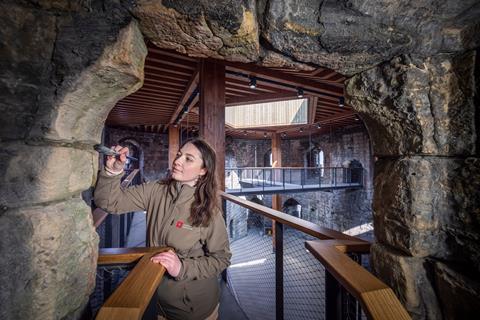 As part of the English Heritage project, walls, turret stairs, arrow slits and fireplaces have been repaired, the chapel has been reroofed, while the carved heraldic plaques above the entrance to Clifford’s Tower, showing the coats of arms of Charles I and Henry Clifford, Earl of Cumberland, have also been conserved.

Jeremy Ashbee, head properties curator at English Heritage, added: “One of England’s most important buildings, Clifford’s Tower is almost all that remains of York Castle, which was the centre of government for the north throughout the Middle Ages and up to the 17th-century.

“We not only wanted to preserve this incredible building but also do justice to its fascinating and multi-faceted history.”