Coach operator Bakers Dolphin was able to drive a group of school children through Storm Dennis to take part in their French ski trip, after their original flights were cancelled. 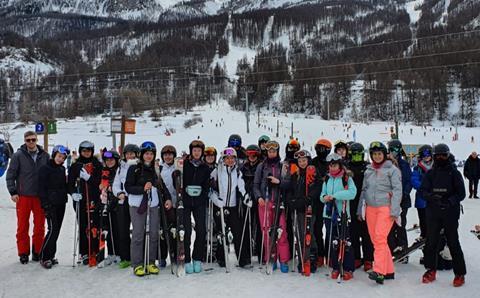 The group were able to take part in the trip despite their flights being cancelled.

The children from Clifton High School in Bristol were planning to fly from the city’s airport to Nice on Saturday 15th February, but learned the day before that their flights had been cancelled due to the weather.

With no seats available on a plane until later on the following week, Weston-Super-Mare coach operator Bakers Dolphin was told of the problem and was able to help.

Working through the night to make a coach available, the operator picked up all 47 children at 9am on Saturday, booked a space with P&O Ferries and had the children on slopes in France on Sunday.

Got a story you want to share with School Travel Organiser? Get in touch by emailing editorial@schooltravelorganiser.com or calling 01908 613323.

Dr Alison Neill, head of Clifton High School, said: “We have to give our sincere and grateful thanks for the exceptional service received during a challenging weekend as a consequence of storm Dennis.

“Faced with flight cancellation for two trips to a ski resort in France they came to our rescue and transported our pupils safely and comfortably. Without the swift and reassuring intervention, the trips would have been cancelled.”

The initial call was put on standby by Bakers Dolphin in case the group were able to get another flight from a different airport.

Amanda Harrington, sales and marketing director of Bakers Dolphin, added: “When we heard about their predicament, we looked at how we might get them there.

“We have a great relationship with P&O Ferries and the two companies worked hard to ensure we were able to get to France. It was a great team effort and showed what could be done despite Storm Dennis.”