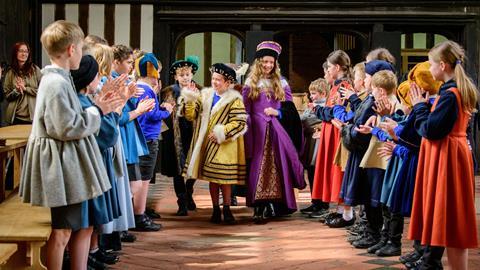 Case Study: living like the Tudors at Gainsborough Old Hall

Teacher Lynsey Gregory reports back from her pupils’ fascinating Discovery Visit to Gainsborough Old Hall in Lincolnshire, one of English Heritage’s newest openings.

At Wigley Primary School, we love to make history come alive by taking our pupils on inspiring trips. We managed this on our recent visit to Gainsborough Old Hall, finding out about the Royal Progress of Henry VIII with an expert-led Discovery Visit workshop.

As a Key Stage 2 teacher, the Tudors was always one of my favourite topics but with changes to the curriculum in 2013, this was no longer an option, unless it was used as our Local History project. Looking at our pupils’ chronological knowledge, we used The Changing Power of Monarchs as our focus. 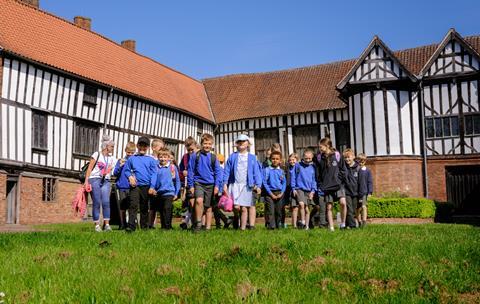 Students visits the historic hall to learn more about the Tudors.

Our visit helped the group understand the preparations needed for a typical royal visit. Gainsborough Old Hall retains all the charm and character of the Tudor period, so our pupils were able to step back in time and experience history for themselves.

We began our session in the kitchen and were fascinated by what life would have been like working there: from how cold the rooms were without the fires lit, to the size of the spit, thinking about how the boys would painstakingly sit by the roasting fire endlessly turning this in preparation for the feast.

English Heritage staff led the activities in the kitchen, making sure that children really understood the jobs of all the people who worked there. These included the cook, steward and clark. They handled the apparatus they would have used for their different jobs – the paddles that held the pies that went into the oven, the pewter goblet for serving the wine, and were able to smell the spices that would have been used for cooking. 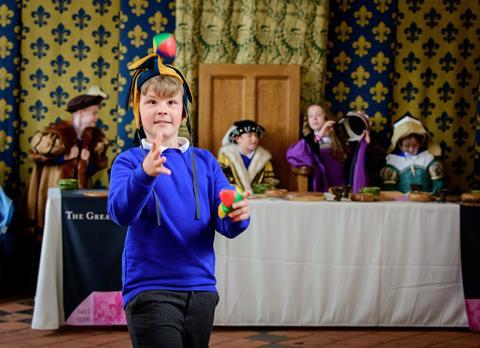 One pupil took on the role of the Jester.

The highlight of the visit for the children was when they dressed up as members of the royal family, household and staff in the Great Hall. As part of the workshop we acted out the banquet, much to the delight of the children.

The banquet was prepared in the kitchens and entertainment was provided by the children who were dressed as minstrels, a juggler and a jester. The butler served the wine, the pantler the bread and the ewerers, who washed the guests’ hands before their meal. Unfortunately, the food taster for Henry died in the process!

The morning was organised for us but, in the afternoon, we were free to explore the site.

The team at Gainsborough were extremely supportive when I came on my free planning visit. I was shown around each room and was given all the best stories to share with my class to inspire them as we looked around.

I also used the free Teachers’ Kit which is full of suggestions for fun and immersive activities, as well as historical information.

I led the class along the same floorboards that Tudor lords and ladies would have walked on, telling them all about the people that lived in the house and their contributions to history. 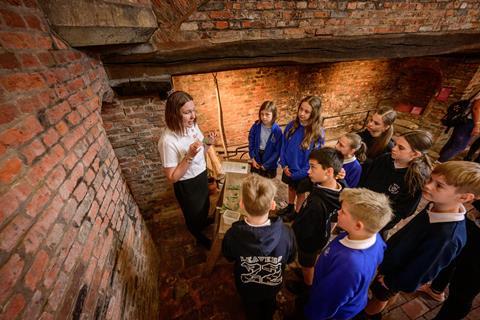 English Heritage staff were on-hand to share their wisdom.

The children loved finding out how the hall was transformed into a theatre.

The corridors were a maze of history – I even managed to get lost amongst the beamed corridors, heavy with latticed glass – a show of wealth. The class loved climbing up to the tower above to explore the magnificent views.

Living history is the best way to learn – by making it real (and fun!) for the children. A visit to at Gainsborough Old Hall will last in the memories of the children for many years to come.

We used the visit to write a diary entry from the perspective of one of the servants preparing the food and waiting on Henry VIII. This is where our visit really came into its own. The Year 6 group also used it as evidence for their ‘shifts in formality’ for their writing, between talking to the servants and addressing the King. As part of the build-up to this, the children re-enacted a conversation between Henry and his servants.

We also used the visit to help learn more about Henry’s divorce from Catherine of Aragon and the effect this had on his relationship with the Pope. The children were fascinated by the early life of Catherine Howard, who lived at Gainsborough Old Hall with her first husband, and how this shaped her life and personality.