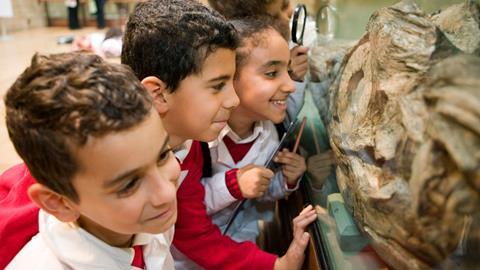 These ten Geography-themed ideas for school trips highlight different aspects of the subject including weather, landscapes, nature and interaction between people and their environments.

Opened in the Cotswold village of Bourton-on-the-Water in 1957, Birdland Park and Gardens was one of the UK’s first attractions of its kind.

The park includes a wildlife education centre, the interactive Discovery Zone with face-to-face animal encounters, and Marshmouth Nature Reserve, a 2.5 acre trail through marshland, ponds, meadow and copse with views over the River Windrush.

These provide schools with a unique resource that can be booked together or used separately to create a fun way of interacting with nature.

Pupils can go pond dipping in the reserve, watch wild birds from lookouts and see insects, bats and other species of wildlife in a natural setting.

The education team offers hands-on activities focused on a whole range of environment, wildlife and seasonal themes, and these can be tailored to match classroom topics.

Pupils can discover how man has changed and utilised the landscape with a visit to this authentic, virtually untouched Welsh slate mine in Powys.

Original objects and mining equipment are still in place as the miners left them, including machinery, tools, candles and a rail track. Opened in 1836 and working until the early 1970s, schools can explore different parts of the Braich Goch mine to compare the contrasting types of early and late excavations.

They can also extend their studies of local geography with a visit to the village of Corris, which expanded with the growing success of Braich Goch and surrounding slate mines.

Houses were built for miners, the number of churches and chapels multiplied and a range of shops were opened to cater for the needs of the miners and their families in the early 1900s.

Pupils will be transported back thousands of years at Creswell Crags, near Worksop in Nottinghamshire. In this network of limestone caves and rocky crags they will experience one of the most northerly places on earth to have been visited by our prehistoric ancestors.

Creswell Crags welcomes students of all ages and can design a visit to suit specific needs.

A good introduction to the site is the Ice Age Cave Tour where students visit the Robin Hood cave to learn about its past.

The tour can be complemented with a workshop, such as Creswell Rocks, where pupils look at how rocks have shaped the world around us and examine the properties of different rocks and how they are affected by elements such as water.

Study Geography at different levels at the Heights of Abraham in Derbyshire. A visit will provide your pupils with a stimulating day out combined with extensive learning opportunities.

Get the day off to a flying start with an exhilarating journey on Britain’s first alpine-style cable car system that will take your pupils to the hilltop park with its fantastic views over the surrounding Peak District. Afterwards head down below for a tour through caverns that wind deep into the hillside.

It is said that the mining of this area began in Roman times, reaching its heyday in the 17th century. Guided tours allow pupils to retrace the footsteps of the miners and experience the network of naturally formed caverns and passageways dating back millions of years.

Dinosaurs are always guaranteed to fire children’s imagination and they can walk in their footsteps on England’s first natural World Heritage site, the Jurassic Coast.

The 95-mile coastline stretching from Exmouth in Devon to Studland Bay, Dorset, has been carved over thousands of years by ice ages and changes in sea level.

The Big Jurassic Classroom educational programme offers a wealth of teacher resources to inspire pre and post-trip studies and the big day out itself. Exciting guided walk and fieldwork activities are available for different ages, including a workshop for primary pupils where they take home their own handmade fossils.

Secondary school sessions include a visit to Lyme Regis to examine how the popular tourist resort is being prevented from slipping into the sea. Pupils unravel the mystery as they follow clues along the two-hour walk.

Pupils will be in their element at this engaging attraction set in a former steelworks in Rotherham, South Yorkshire. Magna comprises four gadget-packed pavilions themed around the elements of air, earth, fire and water.

Of particular relevance to Geography are the earth and water areas, which include stories of rock formation, mining, quarrying and water movement.

Education sessions include Volcanoes and Rocks, where pupils learn about volcanic layers and identify common types of rock.

A highlight is using clay to track the classic vinegar and baking soda ‘eruption’ before taking a core sample through their model volcano and then testing some real rock samples.

Magna also includes a spectacular multi-media show that tells the story of the site’s steel-making history and on-site adventure activities such as zip wire and abseiling.

Once home to the Valley Colliery, this Staffordshire museum and its surrounding landscape shows how the geographical and industrial history of the area has been shaped by the coal industry.

The museum was previously awarded a grant from Heritage Lottery Fund to completely refurbish the coal mining gallery. The museum vividly recreates life in times gone by and today it is hard to believe there was a pit on the site.

The colliery been replaced by more than 30 acres of green space on the edge of Cannock Chase, at the gateway to the Hednesford Hills Nature Reserve. Today the hills form one of the last remaining areas of heathland in Britain. Workshops include Habitat Discovery, for KS2, which unlocks the secrets of the heathland habitat.

Situated on a dramatic 50-acre site near Matlock in the Derbyshire Dales, the stone centre includes ancient tropical reefs, rocks and minerals and centuries of industrial history.

Pupils will be amazed to discover how the fossilised remains of sea creatures that lived near the equator millions of years ago became embedded in rocks high above sea level in this land-locked county.

The centre offers a variety of activities for Geography-based learning, including gem panning, soil study and fossil casting. Several of these activities are also included in the Treasure in the Rocks itinerary that offers short taster sessions.

Visits can be combined with a tour of the nearby Derwent Valley Mills World Heritage Site, which shows how water power was successfully harnessed for textile production.

It might be in the middle of London, but the Natural History Museum is an outstanding resource for Geography studies.The educational programme taps into the collection of more than 70 million treasures from around the world and the new Darwin Centre, the museum’s state of the art research facility, hosts events for students.

General activities for schools include Wildlife Garden Explorers, available from April to October, where pupils are kitted out with a hat and binoculars for an expedition in the museum gardens.

Other sessions are available year-round and teachers and pupils can also visit the galleries on their own with the help of self-led guides. These provide an inspiring way for students of all Key Stages to get the most out of a curriculum-linked museum visit.

This 62-acre wood in the heart of the Sussex Weald dates back 2,000 years and today it demonstrates rural sustainability in action.

Teachers have a wide choice of ranger-led sessions, including an investigation of the wood’s minibeasts, with a pond dipping session, to look at their different habitats and how they use camouflage to blend in with the surroundings.

Another woodland trail is based around the seasons, where pupils look at the nature and landscape at the time of their visit and then work out what will happen in the next season.

Older pupils can take part in a GCSE Geography workshop that examines the impact of tourism and for AS Level there are dedicated ecology studies. Wilderness Wood can also arrange bespoke sessions to complement classroom studies.