“We can help bring the archives to you,” says National Archives’ education team

We spoke with Rachel Hillman and Hannah Carter from the education team at the National Archives about how they have made the transition to online school sessions and what pupils can gain from the experience. 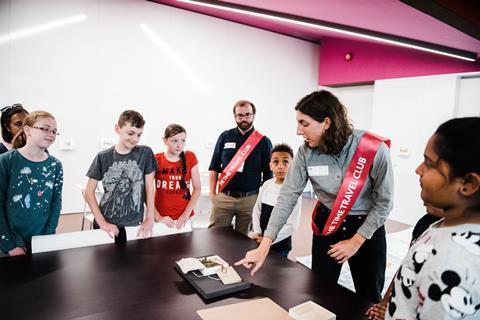 Hannah Carter, education officer at the National Archives teaching a past on-site session.

Q. Tell us about the work you do for schools

Rachel: We usually have on-site workshops in the archives that are currently on hold due to Covid-19, where school children from the age of 5 up to A-Level students come on site and get to handle and work with original documents. Alongside our on-site schedule, we have an online programme via virtual classroom and video conferencing which enables schools and young people to connect with us and have access as much as they possibly can to the real documents. This is a free service and as part of the sessions, we will show documents in different ways, allowing us to virtually step into any classroom across the country.

Hannah: At the moment we have nine taught virtual workshops which last for one hour and more than 20 on-site workshops that we’re adapting to expand our virtual offering. We are introducing a black British history workshop on the Mangrove Nine for Key Stage 3 and 4 and we’re also going to have a Whitechapel session which is aimed at KS4. Hopefully we’re going to be expanding our programme and adding to it all the time. That’s our big focus.

Q. What has the response been from schools?

Hannah: We recently ran a session with Gearies Primary School in Ilford, which went brilliantly. The session was on World War Two propaganda for Y6 pupils which is lovely as it’s really visual. Our idea is to get the students to do a lot of the work themselves, so we’re not just lecturing them about the documents. These sessions are a way of getting away from that textbook style of teaching and really getting children to make their own interpretations of the past. 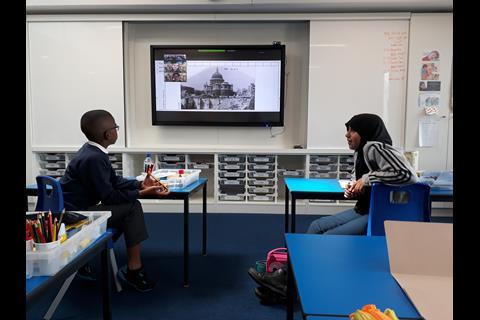 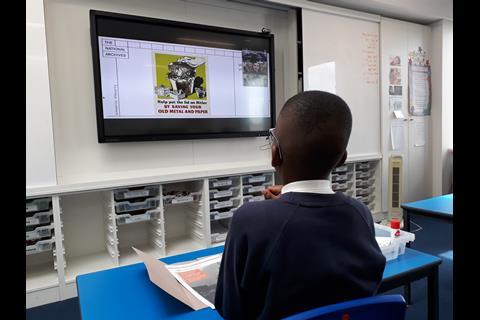 The virtual sessions are hosted by members of the education team at the National Archives. 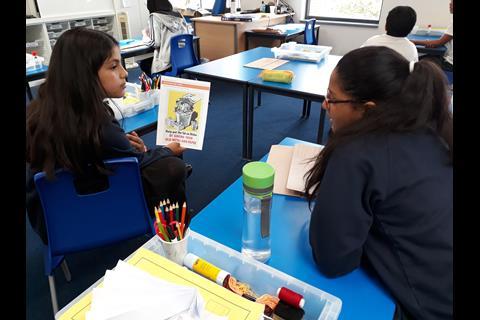 Children discuss the themes being covered in the sessions.

Rachel: We’ve had quite a few enquires from schools about the virtual service and how we can connect with them. I think it will help us in terms of our reach as well, obviously being online, we can connect all over the UK so we can help bring the archive to children who may never have the chance to visit.

Q. How have you adapted to transform your on-site sessions into virtual workshops?

Rachel: I think if we were starting from scratch, it would have been a much longer process but as we’re looking at taking sessions we’ve already researched from an on-site session to an online offering, it’s a slightly shorter process, but it has still been quite intense. It’s very collaborative, Hannah and the other education officers work very closely together and test ideas out on each other.

Q. Why is it important for children to take in experiences like these?

Hannah: Teachers sometimes contact me and tell me that the pupils have been talking about the session and it’s triggered something in them.

“I think when children come on site to us, there is nothing like seeing an original document in person, there is some kind of magic in it.”

It’s really special and it’s a privilege and I think the children understand that as well. I also think when the older students are actually handling the documents, there is a real responsibility they feel and without fail take that on so well, I think that’s a really important experience for them. 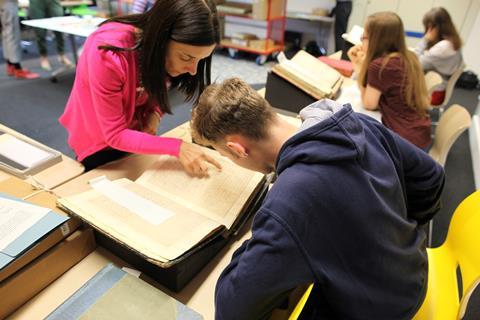 Rachel, education operations manager, helping out a pupil who visited the archive on a previous trip.

Rachel: It just opens children’s horizons. They might be interested in history and the process of history or even the archive itself in terms of employment opportunities such as marketing or press. I think it’s meeting new faces and educators too, they come to us fresh, we have no preconceptions about them. This is a session for them and we want to give them as much information as we can and get them engaged.

Q. Do you have a favourite virtual workshop?

Rachel: They’re all so, so different but if I had to pick one, I really like the session called ‘Four Days Hard Labour’ which looks at Victorian child criminals - I think it’s fascinating for many reasons. One of the wonderful things about the documents is that you have photographs of these children attached to them, descriptions of how old they are, what crime they’ve been committed of doing and very often, these children are the same age as the children we’re working with. I think it brings it home to them that these were real children like them but lived such different lives and the crimes they were committing were often because they needed to do it to survive.

Hannah: I love teaching Medicine on the Western Front because the documents are so personal, students often connect better with them and have a lot of empathy. We get to explore the story of one soldier through a series of documents as well as mental health which I think is a really important topic to discuss with young people. The session can end up having some really great conversations and I think children just connect to this soldier’s story and want to know what happened to him, which is very satisfying to see.

For more information about all of the National Archives’ workshops and how the education team can help your class, visit www.nationalarchives.gov.uk/education.