Brighton Hill Community School in Hampshire went on an insightful trip to some Belgium’s historic battlefields; Sophie Lamb from Rayburn Tours accompanied the school and reports back on the experience. 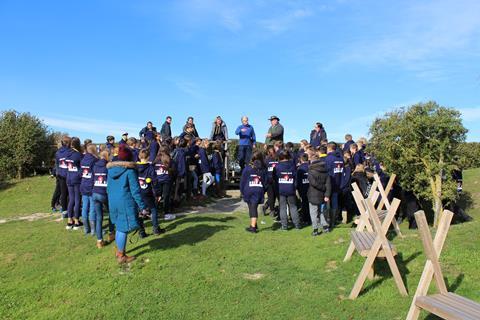 The children were taken around the historic sites linked to World War One in Belgium by History guides Trevor and Richard.

It was clear from the start of my three-day trip with Brighton Hill Community School at the end of October, that the tour guides were going to add more than just their in-depth historical knowledge.

It all started with a phone call. Trevor and Richard (tour guides) gave party leader Hayley Humphries a call before the tour to have a chat and understand exactly what the children needed to know, as well as what she wanted them to get out of it.

Right from our first excursion, I was in awe of Trevor and Richard. Their level of knowledge and the passion they exuded was infectious.

“We might be able to talk about the Battle of the Somme, but there’s no way we would be able to point out the tree line where the tanks came over, or exactly where the gas attack took place.”

Trevor and Richard made sure that it was a hands-on experience for the pupils, getting them involved with reading headstones, interacting with old weapons and modelling World War One’s finest attire. It was evident that the friendly faces of our guides took a huge stress off the teachers. It meant they could focus on their primary job for the trip – looking after the students – whilst also learning more about the topic as well.

But it wasn’t just the excursions that Trevor (or as he later became known, Uncle Trevor) and Richard were there to help with. They went above and beyond for the group, doing all of those things which make life on tour so much easier.

They knew the area and the people incredibly well. And getting sorted in restaurants and navigating French roadworks seemed as if it was just part of their makeup. 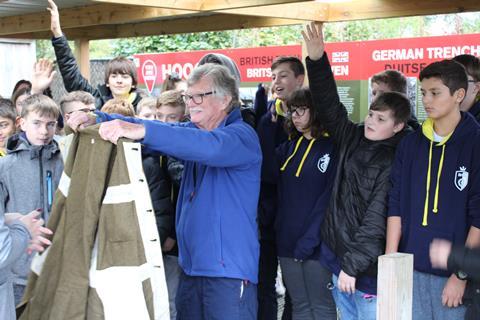 Tour guide Trevor shows the pupils some of the clothes troops would have worn.

Before we arrived in Belgium, Trevor described the process of the tour to me: “All we’re doing is moving the classroom from Basingstoke to the trenches.” Whilst this is true, throughout the tour I realised that having a History tour guide offered so much more than just moving the classroom and having a new teacher for the weekend.

Putting the educational aspect to one side, not only does a guide become an integral part of the tour, but it was clear from the swarm of children wanting photos with them as a memento; the chants being made up for them on the coach; and the tears when we had to leave, that these guides became their friends and people they really admire and look up to.

We forget what it’s like to be 13 years old and in complete awe of someone so knowledgeable. Well, being in the presence of Trevor and Richard on my trip to the battlefields certainly made me remember.

A sample itinerary from a Rayburn Tours war history trip to Belgium includes visits to Hooge Crater Museum, In Flanders Field Museum and the Lochnagar Crater. You can see the full range of trips on offer from Rayburn Tours by visiting www.rayburntours.com.