We went along to meet some of the Milton Keynes Theatre pantomime cast of Jack and the Beanstalk, including some of the Diversity clan, to discover what they can remember from their school days. 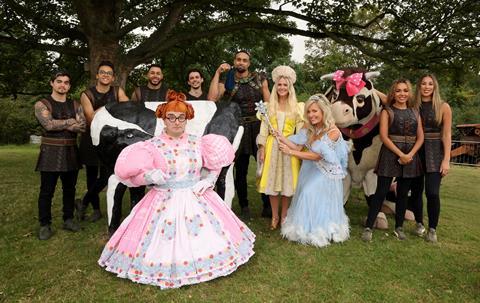 Diversity and co will take to the stage at Milton Keynes Theatre from 11th December.

Starring Ashley Banjo as Jack, along with the rest of the Diversity troupe as his siblings, Gina Murray as Mother Nature and Jack Land Noble as The Dame, Jack and the Beanstalk will be running at Milton Keynes Theatre from Saturday 11th December until Saturday 8th January 2022.

To try and gauge the importance of school trips and learning outside the classroom among some of the cast, we asked what they could remember from their school days.

Diversity dancer Warren Russell, who plays one of Jack’s brothers in the production, said: “I went to Paris on a school trip that was mainly to its art and cultural sites. Highlights which stick out include a boat trip along the Seine River, as well as visits to the Louvre Museum, the Arc de Triomphe and, obviously, the Eiffel Tower.

“We spent two or three days just sightseeing, but it felt more exciting because I was away with my school friends and staying overnight in a new place. My mum is quite strict so I was shocked when she said I was allowed to go on the trip, but I’m so glad I went!”

Sam Craske, who also stars alongside Ashley Banjo, added: “I went to an activity and residential centre in Trewern in Wales. While there I took part in things like rock climbing and canoeing which I still remember well.”

Gina Murray, who plays Mother Nature in the panto and has starred in several touring and West End roles, including Mama Morton in Chicago, said: “Not only have I been on school trips as a student, but I’ve now got the experience of taking my kids on school trips, too. I remember going to Southend Pier a few times and some little museums and local attractions. I also went to Paris and Normandy and remember staying in a hostel.”

“As a parent and seeing it from the other side, I’ve been known to corral all the children on the school coach and forget that I’m not the teacher and just a parent! Those memories are much more fresh in my mind but school trips are very necessary and we really missed them over the last year. My kids were supposed to go abroad and I really want that to happen for them in the future.”

Actor Jack Land Noble, who stars as The Dame, added: “I went along to a pantomime at Sheffield Lyceum Theatre as a pupil. It was starring a well-known comedian called Bobby Knutt and I remember being captivated by him and the performance. My friends and I were probably about eight years old and we were spellbound by the experience. Being that age is a very magical time and I hope school trips such as mine continue for a very long time.”