A school trip to Beaulieu provides schools with lessons in Physics, History and Technology, not to mention an opportunity to get involved in hands-on activities.

Beaulieu, situated in Hampshire, is home to the National Motor Museum, Beaulieu Abbey and Palace House.

These attractions can all be combined into one itinerary for visiting schools through a number of educational programmes, ideally suited to Key Stages 1 to 4.

School Travel Organiser takes a look at the benefits of taking schools on a trip to Beaulieu.

Palace House once would have been used as the gatehouse for Beaulieu Abbey, but since 1538 has been home to the Montagu family. During the 1800s it was remodelled and is now an example of a Victorian house.

Educational activities at Palace House encourage pupils to dress up in Victorian clothing and take on the roles of household staff to learn more about the lifestyle of the people who would have lived and worked in a country house during the 19th century.

In 1538 most of Beaulieu Abbey was destroyed under Henry VIII’s orders during the dissolution of the monasteries. Today students can explore the ruins and get a feel of how the building once would have looked and how it would have been used.

An exhibition in the surviving Domus building tells the story of the 13th century abbey and the Cistercian monks who gave their lives to the church.

An educational programme at Beaulieu Abbey offers pupils the opportunity to take on the roles of guests of the third Earl of Southampton, to learn about the changing fortunes of the abbey.

Pupils will get to study what life was like on the home front during World War Two and the role that Beaulieu had with training war-time secret agents.

At the National Motor Museum schools can take part in a trail that teaches them about developments in technology and how they have influenced the design of the motor car.

Tying in with the Physics curriculum is the For Britain & For The Hell Of It programme, which showcases machines including Bluebird CN7, which broke the 400 mile per hour barrier with Donald Campbell at the wheel, and the 350 horse power and 1,000 horse power Sunbeams. This programme introduces pupils to the principals of design and engineering.

Other programmes for schools at the National Motor Museum include a look into the history of the car, a hands-on activity looking into the more unusual aspects of motor history, and a look into the future of motoring. 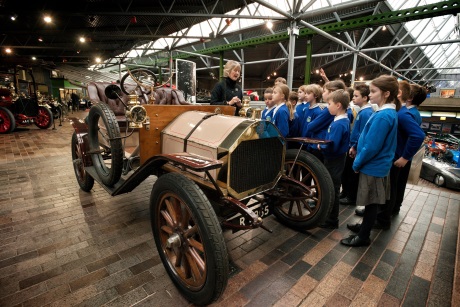 More for schools at Beaulieu

Beaulieu is developing Science, Technology, Engineering and Maths (STEM) programmes to adapt to curriculum changes for all attractions.

The newest addition to the range of interactive activities is Motoring Maths which gives students the chance to apply numeracy knowledge into everyday objects. Lower Key Stages can focus on areas such as shape recognition and measurement, whilst higher Key Stages can tackle Maths problems using data collection and analysis.

In 2017, Science, Technology, Engineering, Art and Maths (STEAM) activities will be introduced to incorporate elements of Art and Design into the existing and new programmes.

The Beaulieu attraction includes entry to the National Motor Museum, World of Top Gear, On Screen Cars, Palace House and the Beaulieu Abbey and grounds. For more information visit www.beaulieu.co.uk.