Pupils from across Years 7-10 of Ark Greenwich Free School enjoyed an unforgettable trip to Brighton in 2019. 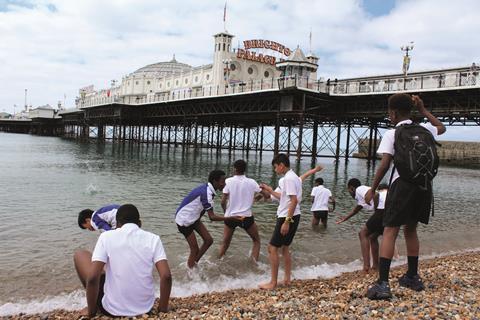 Pupils had the chance to dip their toes in the sea.

Ark Greenwich Free School is a non-mixed secondary school with limited facilities. Running space is limited during break and lunch times and sports facilities and grounds nearby are utilised in PE lessons.

A previous trip revealed that some pupils had never been to a beach before, so a trip to Brighton was organised with the intent of giving pupils the opportunity to experience a popular British seaside hotspot; taking in British traditions; utilising the facilities in the community and developing school values.

Key Stage 3 and 4 pupils from the school in Greenwich were taken to Brighton, having one day to experience the beach, and the other to take part in a swimming class and team sports. The 435 pupils on the trip were joined by 69 teachers that also took part in the experiences offered across the two days. Pupils were organised in their form/house groups with staff associated to those groups, while also following a pre-organised timetable for the two days.

When it was pupils’ turn to enjoy the beach, they were given the autonomy to explore one of the country’s most famous beaches. They could dip their feet in the sea, skim stones, take a ride on the pier or even eat traditional fish and chips for the first time.

When swimming, students visited the local lido to take part in swimming sessions with staff, while the other half of the day was taken up with team sports in a local park, which included rounders, cricket, football and frisbee.

Where’s your most memorable trip over the last year? We’d love to hear from you, get in touch by emailing editorial@schooltravelorganiser.com.

The school has said the trip was linked to British values, particularly the tolerance of those of different faiths and beliefs, as well as enjoying the summer in a popular coastal destination. All pupils were invited to take part in the trip which took place during school hours, meaning there were no costs for the children and it was funded entirely by the school.

The school’s values of ambition growth, fellowship and scholarship underpin the school’s curriculum and this particular trip was also linked to this set of values.

When students returned to school, staff conducted an annual general meeting where scholars reflected on subjects, enrichment, drop down days and trips. In tutor groups students were asked to reflect on the trip and feedback was collected during a whole school assembly where each form rep asked a question. The feedback showed that students enjoyed the trip as a whole and wanted to do more of this in the future, plus they were made aware of the use of a lido within the community.