We look back at an exciting musical experience that a Suffolk school had with a visit to The Red House in Aldeburgh, Suffolk. 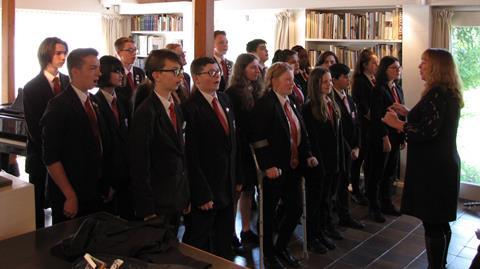 30 students from across Year 7-11 took part in the musical experience at The Red House.

In this instalment we hear from SET Saxmundham School in Suffolk about a Year 7-11 visit to The Red House in Aldeburgh.

The Red House is the former home of the composer, Benjamin Britten. Built as a farmhouse in the 17th century, it remains as it did when Britten lived there from 1957. The site also includes Britten’s composition studio, his extensive library, an interactive museum exhibition space and over five acres of gardens.

The Red House hosts a variety of engaging sessions for all school children, ranging from offers for early years learning, through to activities developed for Secondary school pupils. For example, students can link Music with Science through a Science of Sound experience. They can be transported back in time to explore Stone Age or Anglo-Saxon Music, engage with the beautiful gardens through Musical Minibeasts and even become problem solvers and sleuths by participating in a Murder in the Orchestra day. 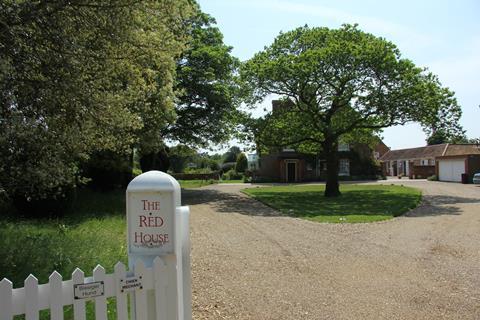 The Red House in Aldeburgh is the former home of the composer Benjamin Britten.

Secondary schools have the added opportunity to work with The Red House education team to create a school visit which is specifically tailored to meet their needs. With this in mind, the overall aim for SET Saxmundham School’s visit to The Red House was to provide an exclusive musical opportunity for students, helping them to engage with the site and learn about Benjamin Britten, as well as developing musical inspiration from the home where he lived, worked and performed.

The trip was organised through a partnership between Tanya Kirk, the head of Music at SET Saxmundham School, and Joe Carr, collections and learning curator at The Red House.

After a pre-visit conversation, it was decided that the students would benefit from having the unique opportunity to develop and perform their own concert recital at The Red House.

This would take place within the inspiring setting of Britten’s Library, with children having the chance to perform with Britten’s own Steinway Grand Piano. The Library was built on the site of a disused barn to the west of The Red House in 1963. The architect Peter Collymore transformed the space into a room that would hold Britten and Pear’s large book collection and also function as a rehearsal space.

Prior to the concert the students visited The Red House and took part in a music and song workshop. This workshop was led by two professional musicians, Lana Bode and Marta Fontanals-Simmons. The children spent the afternoon within the Library, exploring songs from Benjamin Britten’s Winter Words, as well as Copland’s 12 Poems of Emily Dickinson, looking at the different musical interpretations of certain tangible subjects such as the seasons and nature. 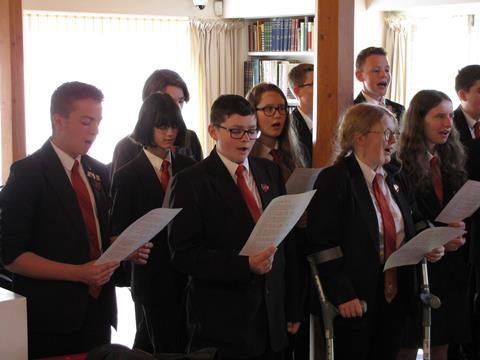 Students took part in a music and song workshop.

This was a unique opportunity for the young people to hear and critique professional musicians, as well as learn about song performance and delivery before their own performances.

The positive effects of the experience were long-lasting. Numbers in the school choir swelled thanks in no small part to the enthusiasm with which ‘old hands’ spoke to new Year 7s about the marvellous experience of singing Britten’s arrangement of O Waly Waly in The Red House library, accompanied by Britten’s own piano.

Buoyed by their experience of performing in this really special environment, a number of students who had previously been quite shy of the limelight, plucked up the courage to audition for the school show and have really blossomed as a result.